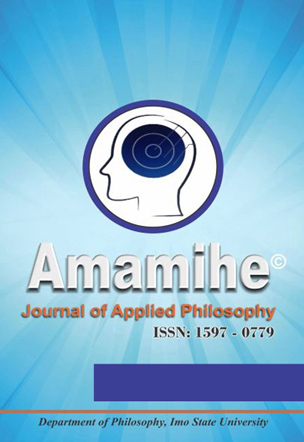 AJAP - AMAMIHE Journal of Applied Philosophy
Vol. 20 No. 2, 2022
CRITIQUE OF BERKELEY'S THEORY OF SUBJECTIVE PERCEPTION BASED ON PERCEPTION IN AUTONOMOUS ROBOTICS

This paper critiques Berkeley's theory of subjective perception and found it incongruent with the phenomenon of perception in Autonomous Robotics (AR). Berkeley argued that perception is subjective. He explains that two perceivers cannot perceive the same object in the same way much as one perceiver cannot perceive the same object in the same way when using different channels of perceptions such as: seeing, hearing, smelling and touching. In this paper, I consider autonomous robots as perceivers in because of their capacity to identify and makes sense of objects or persons in their functional environment. Hence, the predictability of their actions. A swarm of robots working jointly on a task does not perceive the objects they work subjectively otherwise there would be breakdown in communication among them. I argued that "ground-truth" – an objective standard for data classification and identification to which machine learning algorithm adapts is the reason why robots can perceive things objectively. The paper is in three parts. First part deals with exposition of Berkeley's ontology and epistemology with a focus on his theory of perception. This is followed by a discourse on the phenomenon of perception in autonomous robots and ground-truthing. The last part of the paper is a critique of Berkeley's theory of subjective perception based on ideas from perception in autonomous robotics.